Keeping with the row of Barcelona data, I present here a map of the unemployment rate per neighbourhood since 2012 up to 2019.

The data comes from Barcelona open data estat-atur-pes dataset. This dataset contains the column pes_atur for each month of each year. In the presented visualizations I simply used the value of January for each year.

Again, using a choropleth map similar to the one from the mean rent prices map. I just used a different colour scheme from white (almost no unemployment) to red (heavy unemployment).

First an animated gif of all the maps:

And now, all the individual maps per year.

There was no data prior to 2012, so what we can mostly see from here is a kind of recovery from the 2009 financial crisis. We come from 2012 when most neighbourhoods had over 11% of registered unemployment, to 2019 when we can see lighter tones, showing unemployment rates under 9% in most areas.

This is clearly not an in-depth review, just a quick take on the presented data. More information can be seen in the official Barcelona website, or the small publications from newspapers.

Here I am again, this time with something that I love, trees!

It’s mostly common knowledge that the tree of Barcelona is the Platanus (bear with me with tree names, since the names in english confuse me most of the time 🙂 ). I’ve been looking for an excuse to dive back to Barcelona open data, and to create a hex-grid-map.

For this two images, I’ve used the street trees dataset, which only takes into account trees planted along streets, parks and green zones are not taken into account.

And from this excuse, two new data visualizations emerged!

END_OF_DOCUMENT_TOKEN_TO_BE_REPLACED

Following the quick map of Barcelona mean renting prices, I took it to play a little bit more with datasets of Barcelona.

I came across an interesting one, traffic accidents in Barcelona, which could map quite nicely as a Heatmap:

Unsurprisingly there are accidents all over Barcelona, but the city center concentrates the highest amount of them.

The dataset splits the accidents by accident type (alcohol, bad signs etc), but the majority of points are classified as Not provided so there’s no way to prepare more specific maps.

There are datasets from 2014 upwards, to be frank, after checking them the hot points are more or less the same, so 2018 is probably enough to get an idea 🙂

I had some extra fun playing with this datasets, I filtered by different vehicle types to generate different heatmaps. 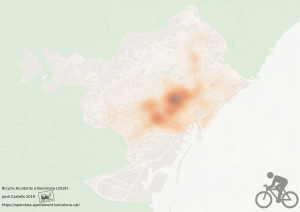 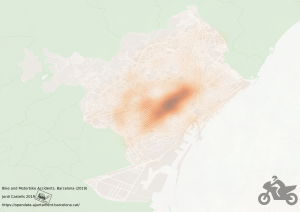 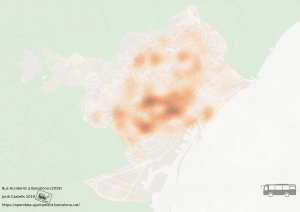 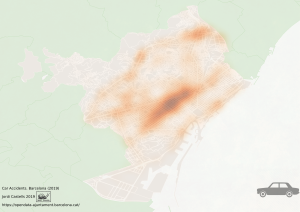 Buses are all over the place (which make sense, since those are running almost non-stop all over the city). On the other hand, Taxis are quite focused in the city center and l’Eixample, not surprising those being the most traffic packed zones.

Personal car accidents appear in the city center too, but we can see some highlights in the two arteries of the city, ronda de dalt and ronda litoral, those motorways are the main way to cross Barcelona connecting to bigger highways and neighbouring cities. There are daily jams in those two motorways.

Bike accidents appear mainly in the center, eixample and close to wide streets (like Diagonal and Meridiana). In other neigbourhoods it looks quite safe 🙂

Find here a clunky non-stylized bar graph of total accidents by vehicle colours. Colour names are in catalan, but the bars match the name so it’s quite international. Yes, apparently there’s a category for black-yellow vehicles, which I guess are Taxis.

What about the insurance myth about red cars?. Well, I don’t know about that, but it’s clear that there’s a big bar of red vehicles having accidents 🙂 But since I don’t have the number of red cars running around Barcelona it could just be that it’s a popular colour. White and Black cars are very common (from a quick walk around in Bcn you confirm that statement) and as you can see those have the most accidents.

Making smallish maps of my area is fun, so I might get more datasets to present different aspects of Barcelona in the future :-D.

This book can be summarized by: Excellent text about projections, also a very dry read.

I understand the aim of it, more of a history on map projections, the importance of them on a given period of time, and what they brought to the table.

As a scholar text it is really complete and thorough (there’s up to 35 pages of referenced works). As something to read from beginning to end it is quite boring. It’s better to read bit by bit when you feel like it. And be ready to concentrate on the contents, otherwise most of what it tries to tell you will just go over your head.

The book contents are plain but beautiful, full renderings of different map projections help give you an overview on how older maps were built. But at the same time I miss some real scans of old maps where we can see those projections in use. Being a history book would be really nice to present both a rendering alongside a real scan. The few cases where a scan is next to the rendering provide a good context to the projection.

Can’t finish this without commenting about fun excerpts of old descriptions of the projections, for example Ptolemy‘s take on his favourite projection:

(…) Although for these reasons this method of drawing the map is the better one, yet it is less satisfactory in this respect, that it is not as simple as the other…. for me both here and everywhere the better and more difficult scheme is preferable to the one which is poorer and easier, yet both methods are to me retained for the sake of those who, through laziness, are drawn to that certain easier method (…)

Full projections are described using this really old language as an example on how the knowledge was passed along before modern mathematics. Luckily, alognside those there’s a description from the author (John P. Synder) which makes everything much clearer.

Not a book I would recommend to everyone, but a really cool book to have in your bookshelf for some short bursts of reading.

A couple of Barcelona neighbourhood mean renting prices maps I’ve made today simply because…. no reason at all. I’m not performing any analysis of the provided data, just a picture 😛

END_OF_DOCUMENT_TOKEN_TO_BE_REPLACED

The DM16L (swiss micros or HP)

Almost half a decade ago (haha, fancy way to say 4 years) I purchased on a whim a beautiful calculator from swiss micros. I’ve been using the spartan dc in the command line since I discovered it and battled to understand what was going on. Quite similar to my first foray with vim almost 15 years go (oh well, getting old here). But since then, I got used to what’s called the Reverse Polish Notation, and swiss micros provides just that, RPN calculators.

This is a very niche post about a piece of hardware made out of love and nostalgia for the old HP calculators. I don’t even know why I write about it, more than it’s been my companion calculator for those 4 years, always in my backpack and I needed an excuse for a post.