The Way of Kings

I went into this because there were so many good reviews of it and I was looking for a holiday book. The summary and the cover were not very amusing, and it being a 1200 pages novel did not help either. But I finally decided to give it a go, what else to do two weeks while camping?

It wasn’t only hype, this is really good entertainment. Mr Sanderson knows how to tell good stories within in an interestingly built world. That’s all there’s to say, if you like fantasy books this one is a must. And I’m hooked into buying the second part of the story (if that’s an indicative of how much I liked it).

Be warned though, you’re in for a slow burn. A set of stories and small backdrop pieces set up the world and present it from various point of views: A naive young noble with a disgraced family, a surgeon apprentice turned soldier and fallen into slavery, and finally, the classic portrait of a ruler who has a very strict view of honour. Those three are the bulk of the book, sprinkled with an assassin, a fisherman on a remote land, the young king and etcetera.

Compared to other fantasy like Game of Thrones it is a very tame book. Yes, there’s war, there are assassins, some characters get tortured one way or another, some fall in love, a lot die… but it feels like a book a younger audience could also enjoy. Lots of mystery, fights, special powers, plot turns… I would not be surprised if the story is pitched in the future for a Hollywood adaptation.

On the things I did not like… I’m not a fan on how the drawings and pictures are treated in my edition (Spanish 6th edition). The original art tries to give the feeling of an old parchment. In my print it does not look convincing, and to add to the injury the translation on top of the images uses a regular font instead of giving it a manual treatment, it falls too hard into the faux parchment area for my taste. There are also some mismatches between the country names in the map and in the text… nothing that detracts from the book, but looks cheap for such a huge and expensive novel.

This book can be summarized by: Excellent text about projections, also a very dry read.

I understand the aim of it, more of a history on map projections, the importance of them on a given period of time, and what they brought to the table.

As a scholar text it is really complete and thorough (there’s up to 35 pages of referenced works). As something to read from beginning to end it is quite boring. It’s better to read bit by bit when you feel like it. And be ready to concentrate on the contents, otherwise most of what it tries to tell you will just go over your head.

The book contents are plain but beautiful, full renderings of different map projections help give you an overview on how older maps were built. But at the same time I miss some real scans of old maps where we can see those projections in use. Being a history book would be really nice to present both a rendering alongside a real scan. The few cases where a scan is next to the rendering provide a good context to the projection.

Can’t finish this without commenting about fun excerpts of old descriptions of the projections, for example Ptolemy‘s take on his favourite projection:

(…) Although for these reasons this method of drawing the map is the better one, yet it is less satisfactory in this respect, that it is not as simple as the other…. for me both here and everywhere the better and more difficult scheme is preferable to the one which is poorer and easier, yet both methods are to me retained for the sake of those who, through laziness, are drawn to that certain easier method (…)

Full projections are described using this really old language as an example on how the knowledge was passed along before modern mathematics. Luckily, alognside those there’s a description from the author (John P. Synder) which makes everything much clearer.

Not a book I would recommend to everyone, but a really cool book to have in your bookshelf for some short bursts of reading.

Children of Time is one of those presents that I knew was coming (Pestering for it for quite some time), and once it was in my hand it took me a couple of weeks to finish, it is one of the most exciting science fiction books I’ve read in a while.

The idea is an interesting one. Humanity has reached a point where it starts colonizing and terraforming other planets, but disaster ensues, and we’re brought back to less technological times, while some of the terraformed planets still inhabited start their own story.

Flash forward lots of years from the fall of that technologically advanced civilization, the earth is dying, and some groups start some sort of Noah’s ark spaceship only with people inside with the hope that they can reach one of those old fabled terraformed planets. But they will have to deal with whatever has evolved there (hint, it has 8 legs).

Interestingly, those inhabitants are not painted as horrible mutations that humanity has to fight, but a relatable nascent civilization that has its own fears and hopes. The book dabbles in both storylines, one of the humans travelling and their social problems inside the spaceship, and the spiders, how their society progresses in strange ways for us, and their own way of seeing the world. All of it coming altogether for the book finale.

This is an open ended book, and as far as I’ve checked online the second book should come soon enough (2019 according to wikipedia)

Continuing with the weirdness and going totally off-topic from the type of posts you usually find here, let’s talk about a book of spoons and what it meant to me!.

The book is a short one, split into three parts:

I’ve never heard of Barn The Spoon, he is a spoon artisan carving from green wood mostly using a knife and an axe. I actually got attracted to this book after seeing it while attending a workshop on wood carving, the idea of such a specific book and the hippie feel of everything related to carving without any advanced tools picked my interest, so immediately ordered it from Amazon.

I can’t recommend this book to everybody, but the vibe that it transmits it’s something felt close. The story of Barn is an interesting one, worth reading. And the included pictures are gorgeous (yes, those spoon photos are actually amazing, kudos to the photographer). The only point where it fails to me is trying to explain the knife grips using only prose, probably my engineer’s mind is tricking me here, but some drawings on what is trying to be conveyed would help.

After skimming it, and then thoroughly reading the book, Armed with a sharp knife, a hook knife and the explained techniques I started to carve my first spoon. Which was ok, chunky and nicer to look at than to use, but a second one followed, then a third… and after half a year spoons keep coming out of my hands!.

That’s the best compliment to give to the book, it made me want to carve and enjoy the carving process in itself. I feel that this was the point of all of it :-D.

END_OF_DOCUMENT_TOKEN_TO_BE_REPLACED

This blog is dead :-O, so why not create a small entry with the latest book I’ve read that I enjoyed more than usual?

Quite an inventive horror story. I’m not a big horror reader (mostly Stephen King, some of Poe and Lovecraft), but the theme was one of what I believe is classic cosmic horror (Leviathan and incomprehensible things) with some original sprinkles.

The book is split in two stories. What I would consider the main story (Dan and Abe), and a long flashback (Rainer and the origin of the evilness). And this seems to be quite divisive between the readers of this book. I’m leaning on the side that the main story is fantastic, while the flashback takes too long to develop and eats half of the book for no added benefit.

That nitpick apart, the story of Abe the widower and how meeting Dan transforms his life, for good and bad, is an amazing one, and John Langan knows how to paint the scenes beautifully. Let me tell you, that there’s a couple of passages that gave me goosebumps, and if I have to go take a leak at night my brain ensures that I remember them.

What to say about Hyperion.

It’s a Sci-Fi book about 7 pilgrims with 6 stories in it. (Yes, there’s a story missing there, that’s not a typo).

I have this book since 2014 but I did not dare to start it until recently. I excuse myself telling people that it is a long book about weird tales, but there’s no excuse, you should recommend this book to everyone, sci-fi lover or not.

The different narrations range from impressive to breath taking, I don’t think I’ll ever forget Father’s Duré notes, or Weintraub’s sad account of his family’s misery. All the other are also well told, but as it happens, everybody will remember their favourites. Sometimes seems that Simmons gets over the top, but those are minor flops easy to forget.

Be warned though, you may feel swindled when finishing it. Every pilgrim is set off to meet a mysterious god-like machine called the Shrike, but the book does not revolve around this adventure, but on the backgrounds of the pilgrims. So, at the end of the book, you know the same things that you knew back when you started sort of.

Don’t forget that there’s a second book “The fall of Hyperion” (I’m reading right now), that may solve some of the mysteries presented here. 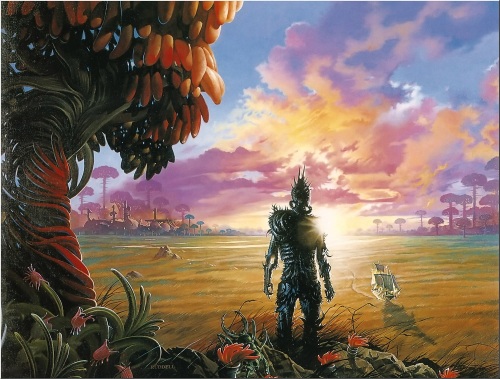